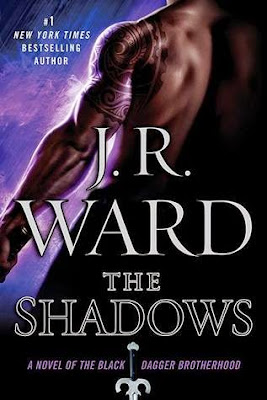 Trez “Latimer” doesn’t really exist. And not just because the identity was created so that a Shadow could function in the underbelly of the human world. Sold by his parents to the Queen of the S’Hsibe as a child, Trez escaped the Territory and has been a pimp and an enforcer in Caldwell, NY for years- all the while on the run from a destiny of sexual servitude. He’s never had anyone he could totally rely on... except for his brother, iAm.

iAm’s sole goal has always been to keep his brother from self-destructing- and he knows he’s failed. It’s not until the Chosen Serena enters Trez’s life that the male begins to turn things around... but by then it’s too late. The pledge to mate the Queen’s daughter comes due and there is nowhere to run, nowhere to hide, and no negotiating.

Trapped between his heart and a fate he never volunteered for, Trez must decide whether to endanger himself and others- or forever leave behind the female he’s in love with. But then an unimaginable tragedy strikes and changes everything. Staring out over an emotional abyss, Trez must find a reason to go on or risk losing himself and his soul forever. And iAm, in the name of brotherly love, is faced with making the ultimate sacrifice…

Arlene's Thoughts
I’d like to note for the record what a good book friend I’m capable of being. I had no intention of reading The Shadows after touting how (1) I’m completely done with the BDB series, (2) J.R. Ward lost me several installments ago, (3) there’s nothing I find interesting in this world anymore, blah, blah, blah… So leave it to my favorite reading buddy who has a convincing, or rather determined should I say, way about her to get me to read something I didn’t have my radar on. You know who you are… ;)
Well it was no surprise that the flavor and style hasn’t changed from the last installments that have been major misses on Ward’s part. Unfortunately, The Shadows didn't keep my interest in the slightest. It’s a wonder I completed the book in its entirety, which didn’t involve me skimming or skipping any parts. No, I suffered through it completely.

I read all about Trez and Selena, which I’ll have to admit that their ending surprised me. I suffered through Rhage’s anxiety attacks, Assail and the Lessors drug fest, iAm’s search for a cure to Selena’s condition and the opening of the new BDB training center, which introduced us to Paradise. As I've said before, too many storylines shoved into one book. Too much going on and nothing that I was interested in.

I will say that for some reason the dialog and narrative in this book annoyed me quite a bit. All the acronyms and lingo made the story feel contrived, which didn’t add to the heavy nothingness that hung in the air.

As I’ve said before, I have no interest in continuing with this series despite Ward’s intention of rehashing all of the brother’s lives once again. My feeling is if you told their story once and you feel you need to tell it again, you clearly didn’t do something right the first time. Yes, that’s a blatant reference to the debacle that was Blay and Qhuinn’s story, but Ward had her chance and I’ve lost interest. Sorry to say…
2.5 Suns

Crystal's Thoughts:
I have given this series everything I have. I've looked past what Ward did to Jane, I've looked past the numerous storylines that take over the entire book and main couple, I've even grudgingly let go of Qhuay, but I can't do it anymore. This was my one last ditch effort to fall back into this series that I once loved and unfortunately it just showed me that I have to let it go.

So many things were wrong with this installment. I don't know if Ward has just lost her mojo or if she is taking this series in a new direction that just doesn't connect with but whatever the reason this book fell flat. What reasons did it fall flat you ask. From the top of my head I can tell you that the language she used which in past books I loved and thought was funny grated on my nerves, I had no connection to Trez & Selena, and the guys were WIMPS!

I'll start with the language. Ward has always had slang thrown in her books and at first it was fun because it wasn't over done. In The Shadows she must have had an expert sitting next to her because every other sentence it felt like she threw in slang words. At one point Wrath said scruued....Yeah it didn't fit. I'm okay with slang when it fits, but it was used way too much. And now that I am thinking about it maybe she used it to man up her men?? Which brings me to my next point...

The guys! WTH?! I remember reading these books and counting down the pages until I saw MINE! I remember thinking I have to wait 20 pages for a steamy scene?! That's too long! My goodness this book if I had to rate it on steam scale would be a negative 100. Okay well let me take that back because the Chosen sure sexed it up in this one. So much so that I felt uncomfortable and started wondering if maybe Ward gave the girls the testosterone! When Cormia came around she wasn't like this and I thought all Chosen were like her, a little timid, a little shy, and not very knowledgeable when it came to the opposite sex. Boy was I wrong. Selena could make even V blush I bet! Anywho back to my main point, the guys were so wimpy and emotional in this one. I just don't get what happened. I miss the MINE days and the selfish arsehole days *sigh*

Trez and Selena were another problem I had with this book which hello was about them so yep its a big problem. I was so psyched when I found out this book would be about the shadows. I have loved them from the beginning so I couldn't wait to dive in. Well what I wanted was not what I got. Basically Trez and Selena were an episode of the Bachelor with only one girl trying to win. Yes it was sad what eventually happened which I thought was unnecessary, but it didn't really bother me because I wasn't connected to either one of them. IAm storyline felt like Ward decided she needed some kind of HEA so she threw in a few minor changes and served a few things on a silver platter for her readers. Yeah not cool in my opinion and just made it all seem ridiculous.

Okay I'm done ranting. I could go on about the whole strange Shadow world that didn't really fit, or the Rhage situation that was a complete waste of time and made me want to scream GROW A PAIR, but I'll leave it and just say I am officially done. I don't need to see what happens with the BoB or the new recruits. I don't even need to see what happens with the angel. I'm just done.