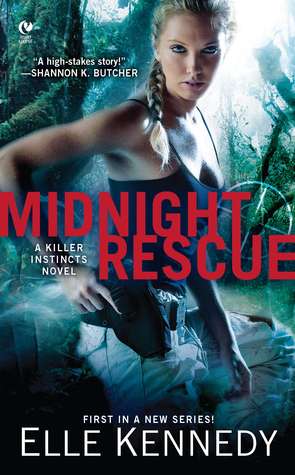 Abby Sinclair had a desperate childhood until she was rescued and adopted by a retired army ranger who molded her into a master of self-defense. Now, she's a cunning and fearless assassin thrust into assignment after dangerous assignment, using everything she has-nerve, resilience, strength, sex-to come out on top. Her only rule: trust no one.
Abby's latest assignment is in Columbia: go undercover and snuff out a dangerous arms dealer active in the underground sex trade. But when Abby purposely blows her cover in a last-ditch attempt to free the helpless victims, deadly mercenary Kane Woodland is recruited as back-up. His mission: get Abby out of that hell hole.

The last thing Kane expects is to feel a primal attraction for Abby. But when she convinces him to join her on her perilous mission, their newfound passion could put the lives of their whole team at risk.

You probably recognize Elle Kennedy’s name from her hit New Adult books, The Deal and The Mistake, but she’s also the writer of fabulous romantic suspense novels.  I read Midnight Action (book 5) and really enjoyed it so I jumped at the chance to start this action packed series from the beginning!  Midnight Rescue was full of suspense, danger, and of course, a sexy romance.

Abby is one of Noelle’s Chameleons, elite female assassins/operatives, and Abby is one of the best.  As a teenager she was rescued from a horrific situation by an army ranger who then adopted Abby and trained her to take care of herself in every deadly way imaginable. Abby’s put those skills to use working for Noelle. I do so love a lethal woman, only when she’s killing bad guys, of course!  On assignment Abby comes across a group of girls held captive and set to be auctioned off as sex slaves.  The only way to gain access to their location is to blow her cover, and allow herself to be captured.

When Noelle realizes Abby’s been captured she enlists the help of Jim Morgan and his impressive team of mercenaries. As second-in-command to Morgan, Kane takes point and when they rescue a bruised and battered Abby, Kane can’t help the protective urges or the attraction she stirs up in him. It is evident Abby’s tough and guarded, but Kane yearns for her trust and confidence. Will she let him in?

While the subject matter of sex slavery trafficking and Abby’s past made parts of this book difficult to read, the majority was thrilling, fast paced, and sexy as heck!  Kane teaches Abby to let someone in and let go, and Abby is the first woman Kane has cared in many years (yes, there is a tragic story there).

What I love about this type of romantic suspense is the fact there’s no languishing in angst or melodrama.  There’s no time when you have much more important things to worry about, like rescuing teenagers from being sold into sexual slavery or possibly getting shot!

Midnight Rescue had a thrilling end with some loose romantic ends left open for Trevor and Isabel, but I have to wait until book three for their romance!  Dang it.  Luke, the sexy Cajun better deliver is all I have to say because his romance is next.