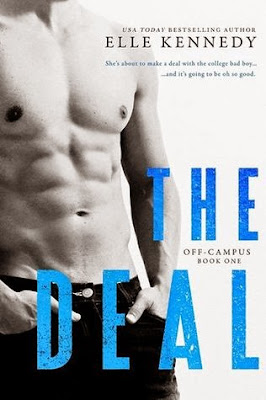 The Deal (Off-Campus #1) by Elle Kennedy

She’s about to make a deal with the college bad boy...

Hannah Wells has finally found someone who turns her on. But while she might be confident in every other area of her life, she’s carting around a full set of baggage when it comes to sex and seduction. If she wants to get her crush’s attention, she’ll have to step out of her comfort zone and make him take notice... even if it means tutoring the annoying, childish, cocky captain of the hockey team in exchange for a pretend date.

All Garrett Graham has ever wanted is to play professional hockey after graduation, but his plummeting GPA is threatening everything he’s worked so hard for. If helping a sarcastic brunette make another guy jealous will help him secure his position on the team, he’s all for it. But when one unexpected kiss leads to the wildest sex of both their lives, it doesn't take long for Garrett to realize that pretend isn't going to cut it. Now he just has to convince Hannah that the man she wants looks a lot like him.

It's been a while since I've jumped into a New Adult book that centers on college life. I feel that genre and theme have played itself out over a year ago. However, I kept seeing great ratings for The Deal by Elle Kennedy, so I thought… why not.

So glad I caved to my instincts and tried out this novel that many have raved about. The book was absolutely perfect for my current mood!

Garrett Graham has everything going for him. He’s the captain of his college hockey team, going to the school of his choice on his dad’s dime and enjoying the attention of the puck bunnies that throw themselves at his feet to up their social status at school. However, when he lands a big fat ‘F’ on his philosophy exam, his hockey playing might be in jeopardy if he doesn't bring his grade up. Garrett isn’t one to let his chances of playing pro hockey slip through his hands, so if he can just convince the class brain to tutor him then he’d be back on track.

Hannah Wells doesn’t have it as easy when it comes to school life. She works to pay for most of her expenses and studies hard to maintain the scholarship that keeps her enrolled at Briar. However, after playing it safe for years because of a tragic event that left her damaged, she realizes she’d like to catch the attention of a football player she’s been crushing on.

When Garrett proposes to help her land her crush’s attention in exchange for some tutoring sessions, they are both in for a rude awakening after an innocent kiss.

The Deal had everything I enjoy in a novel…. A strong willed girl, an adorably arrogant guy, witty dialog, fun nicknames and name calling and a plot that unfolds itself in a way that has me falling for the characters.

Garrett was absolute perfection! I loved his stubbornness and determination to get what he wants. I adored his protectiveness of Hannah and I fell for his antics that proved how far he was willing to go to keep the girl he loves by his side. When his past revealed itself, I quickly learned that as plush as his life looked on the outside, there was definitely a price to what I thought was a free ride.

Hannah Wells was immediately likable with her strong-willed personality. I loved how she handled Garrett’s cocky attitude and gave him a run for his money. In the end, her sacrifices for his well-being proved to me how much she truly cared for him.

Together these two were a perfect pair! Their sparring and carefree ways with each other had me feverishly turning the pages until I stumbled upon the ending too soon. Overall, I loved the college setting, hockey games, and music recitals these two experienced at school. The Deal was exactly what I was looking for, and I finished it all too quickly!