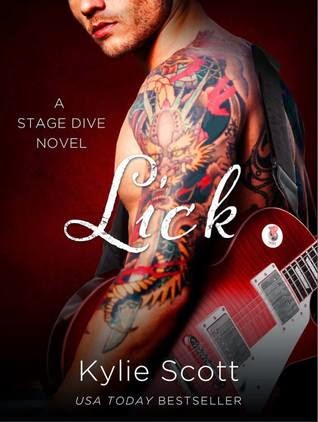 Waking up in Vegas was never meant to be like this.

Evelyn Thomas's plans for celebrating her twenty-first birthday in Las Vegas were big. Huge. But she sure never meant to wake up on the bathroom floor with a hangover to rival the black plague, a very attractive half-naked tattooed man in her room, and a diamond on her finger large enough to scare King Kong. Now if she could just remember how it all happened.

In Kyle Scott's Lick, one thing is certain: being married to one of the hottest rock stars on the planet is sure to be a wild ride.


My Thoughts
If finishing Lick by Kylie Scott in one short day is any indication that I enjoyed this book, then yes, I shamelessly admit that I really liked this novel. Now, it’s not without a few flaws, but when the hot and handsome rock star David Ferris entered the scene, I threw all sense to the wind and just went with this wild and erratic romance.

When Evelyn Thomas heads to Las Vegas to celebrate her twenty-first birthday, she finds herself slap-ass drunk and hung-over the next morning. To add to her pounding headache, she soon learns that she got hitched to a famous rock star and has no clue how it happened. David Ferris sees things differently. He’s excited about the possibilities, but as soon as he realizes Evelyn wants nothing to do with this huge mistake, he walks out and gets the wheels in motion to annul their marriage.

Now under normal circumstances, I’d chalk this romance up as an over-the-top attempt to repurpose what I’ve seen and read before. However, I think Kylie Scott just caught me at the right time and the right moment because I just went with it and plowed through the story to see if these two could make it work.

It also helped that I liked both characters to a more than mild degree. I appreciated Evelyn’s sense to walk away and not take advantage of the situation she was in and I fell for David’s attempts to win the girl. It didn’t escape me that their romance was rushed and sudden, but I’m a sucker for romance sometimes and I handed it to them for winning me over so easily.

I’ve already reserved the next few books from the library, so yes.. Kylie Scott caught my attention. I can’t wait to read about the other members of the band.
3.5 Suns