Review: Always You by Shilpa Mudiganti 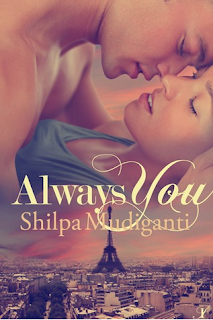 Lyla has to move on. She’s been stuck in a rut since her heart was broken five years ago. Trying to decide about life with her fiancé, Nick, she resolves to finish one last project before moving to Spain and starting a new life. That is until she is face to face with the one man who broke her heart all those years ago, Alexander Knight.

Five years ago, when Alex and Lyla meet at his friend, Andrew's grave, they fall deeply in love. But, Alex is hiding a secret that will destroy his relationship with Lyla and does. What Lyla doesn’t realize is that Alex has changed since their break-up, because of her love, only she still has hate in her heart towards him.

But now, fate has brought them together in such a way that they have no option but to remain dangerously close - dangerous enough for Lyla to fall in love with him again. How can she? Not after what she knows about Alex and what he did to Andrew.

It’s true that love can change people for the better. But is it enough? What will happen when two broken people with a past come together? Can they forgive and heal?


My Thoughts
Well if I’m being completely honest, it was the book cover that attracted me to Always You. I mean look at the gorgeous pose happening here! Yes, I’m among the many that judge a book by its cover and for the most part it’s usually a disappointment, but in the case of Always You it was simply a mild surprise.

A small part of me was expecting a little bit more where the story of Alex and Lyla was concerned, and I think if it was about 100 pages longer Mudiganti would have kept me glued to the book with a more developed storyline. However, for an abbreviated novel, it delivered in the areas of interesting characters, plot and steady pace.

There were parts of the book where I wanted the author to just reveal the back-story and get it done with, but patience isn’t a character trait of mine, so I have only myself to blame for my frustration.

Overall, I enjoyed Mudiganti’s story and I’m curious to see what else she has out there. I'd definitely give it a try.