Review: Back to You by Priscilla Glenn 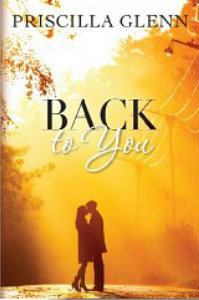 
Back to You by Priscilla Glenn is a wonderful love story that does nothing short of pull at your heartstrings from the first few pages to its rewarding conclusion. I loved Glenn’s writing that takes her readers through a journey of past and present as two people confront some emotional events from their past to ultimately find their way back to each other in the present.

This story begins with Lauren taking a job at a local day care, as she works towards her postgraduate degree. She’s excited about the possibilities that face her with her new job, her studies that are going great, and the new love interest in her life. All of that comes to a sudden halt when a three year-old enters her day care room holding her father’s hand who also happens to be the person who broke her heart in high school. Despite what people say that time heals all wounds, the eight years that lapsed between Lauren and Michael’s last encounter is not enough time to erase the emotional hurricane ready to break her hard earned resolve.

This story is about friendship, love and most of all redemption. Back to You offers its readers a wonderful adventure between two characters, Lauren and Michael, that have a ton of emotional hurt hidden under layers of hard earned contentment. They’ve both attempted to move past the pain of their past and build a life that brings them measured happiness. However, despite their present happiness, there’s an underlying feeling of loss due to Michael’s choice to walk away eight years ago.  His decision, that at first appears selfish, is nothing short of difficult for him, as you witness the pain he endured as a child and the effects it had on his choices.  It was hard not to fall for this character and accept his hope for redemption.

I do have to admit that after learning of Michael’s decision and seeing the possibility of a relationship between Lauren and Adam, I was rooting for Adam through most of the story. But when two people have the history that Lauren and Michael have, it’s hard to ignore what feels right. I was happy with Lauren’s choices throughout the book and Michael ultimately won me over. There were moments of true heart where I found myself re-reading passes for the sake of not being ready to move forward.

Despite the narrative flipping between past and present, the flow was perfectly paced.  I achieved a full understanding of how they got to where they were, and what they experienced in their past to have them make certain choices.

Email ThisBlogThis!Share to TwitterShare to FacebookShare to Pinterest
Labels: 4 suns, arlene's review, back to you, priscilla glenn