Review: From Rags by by Suzanne Wright 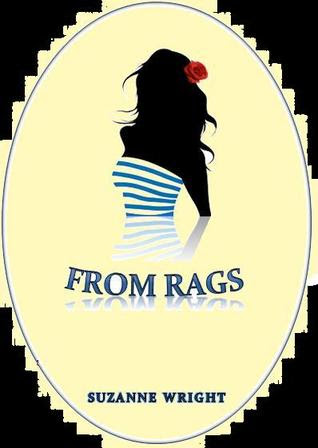 There has only been three people in Jaxxon Carter's life who truly mattered to her. Her mum, who committed suicide. Her sister, who she hasn’t seen since her teens. And Connor McKenzie, who disappeared from her life the same day he left their foster home. The hardest part of that was that he never completely left her life because she was forever seeing him on T.V. or in magazines as a Formula One Driver. But Jaxxon refuses to live a ‘woe is me’ life, even in spite of living alone in her one-roomed flat and being expected to survive on a ridiculously low income. Then one night she is offered a modelling job and before she knows it she has been catapulted to the peak of success, gaining fame, fortune and security. Oh and a stalker.

Connor McKenzie is busy trying to shake off his crazy ex-girlfriend – another woman who thought she could get around his no marriage rule – when he sees Jaxxon on the cover of a magazine. Remembering how close they had once been, he’s shocked when she doesn’t respond to his attempts to contact her and then acts indifferently to him when they meet. But Connor can’t let it go. The only reason he had kept his hands off her ten years ago was that she had been younger than him. Now that they’re adults, he isn’t prepared to allow anything – not even Jaxxon – to stop him from having her.

From Rags is a blend of everything I love: SMOKING HOT sexual tension that comes from an antagonistic relationship, suspense filled mystery, and a romance stemming from a long-time friendship.  To find such an addicting story from a self-published author is gratifying.


Jaxxon grew up in foster homes when her loser mother overdosed and died when she was eight. She had no one but her older sister Leah and Connor McKenzie, another foster care mate.  Both left her and never came back when they were at legal age. First Connor then Leah.  Left at fourteen, Jaxx learned to build a wall around her heart and never let anyone close.  They can’t hurt you that way, and Jaxx is over being hurt.  She thought she shared a special and close relationship with Connor, and that he’d come back eventually, but the cruel claims by her sister shattered any thoughts in that regard.  She’s since seen Connor splashed across the gossip magazines because he made it big as a race-car driver, and is never without a beautiful woman at his side.


She grew up in a tough world but learned to survive and doesn’t wallow in self-pity.  Jaxx has always been a magnet for attention, beautiful and alluring, she’s used to attracting unwanted attention.  But one night her looks and attitude pay off when she attracts the attention of a modeling agent set to find the right girl to launch his new cosmetics line.  This is when she comes back into Connor’s focus.  Understandably, Jaxx is ticked at Connor.  How dare he think he can just waltz right back into her life after letting all this time pass without contacting her?  I was pretty ticked at him as well, but it’s better to reserve judgment until you’ve heard the whole story.


I just loved Jaxx.  She has a no nonsense view of life and didn’t take crap from anyone, and trust me, she got a lot of loony-tunes! Loved this quote:


And then he made the biggest mistake of his life: he attempted to touch Jaxxon. Having reached her limit with the randy bastard, Jaxxon leant toward him slighty. “Do you see this pole? If you don’t stay out of my face, I’m going to rip you another arse hole with it. Understand?” He gulped and nodded before awkwardly skiing away.


That still brings a smile and a laugh!


The initial hostility and lust between Connor and Jaxx was so much fun, and their relationship was very intense the minute they lay eyes on each other.   Let me tell you, the sparks fly! Massive amounts of sexual tension radiated off the page.  I’ll give you a taste:


…his lips travelled down to her neck. Connor licked it then bit down hard.  She shuddered.  No, she wasn’t immune to him the way she wished she was, and she hadn’t ceased wanting him. If anything, her attraction to him was even stronger. “See—still my Jaxx.”


Add to this deliciousness was the mystery of Jaxx’s stalker who keeps upping the ante in his/her moves.  Connor is not without baggage and he’s got his own stalker of sorts in the form of an ex-girlfriend who tries her best to sabotage Jaxx and Connor’s relationship.  Fortunately, Jaxx is one smart cookie and this girl has nothing on her!  Her reactions and dealings with this nitwit were very satisfying and brought a smile to my face.  This added excitement and suspense to an already thrilling story and I just lapped it up!

From Rags was a well crafted story that’ll keep you glued to the pages and guessing until the end.  Don’t miss out on this self-published gem!