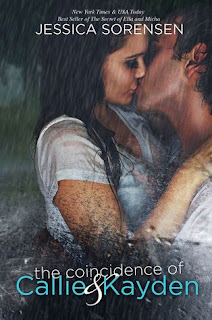 My Thoughts
In the existence of our lives, there is a single coincidence that brings us together and for a moment, our hearts beat as one.

That was the night Callie saved Kayden’s life in more ways than one….

Wow!!l ~rubs face and expels a deep sigh~ This is probably one of my top five favorites for 2012. I’ve read a LOT of great books this year, but leave it to Sorensen to help me finish off this reading year with an emotional punch!!

This unlikely pair might come from the same town, where Callie plays the role of an outcast striving to disappear after a horrific incident; and Kayden is the superstar quarterback that hides a secret so prevalent, yet no one seems to notice. They’ve had plenty of opportunities to cross paths, as Callie is the football coach’s daughter, but it’s not until she stumbles upon Kayden during a sad, yet all to real moment that brand these two as possible soul mates…. Yes… yes… I believe in soul mates, destiny and everything that fits perfectly in a love story. ☺ So call this my brand of entertainment.

Then, when Callie goes off to college, she finally breaks out of her shell and this new person she’s become draws the attention of Kayden, who never forgot the part she played in saving him from an emotionally gripping moment. They slowly become friends, but not without the struggle of learning to trust one another. When they soon learn about each other’s past, it only serves to fuel the fire of possibilities between these two.

There was so much emotional charge infused in this novel that I could not get my mind off of these two characters the entire time I was reading their story. I loved everything about this book … from the alternating POV’s, to the perfectly flawed characters, and the gradual build up between Callie and Kayden. There were tons of obstacles these two had to face before they could even begin to let their guard down and begin a relationship.

From the moment I opened this book to get a glimpse of the length, simply to see when I should fit it in my ever mounting TBR, I read one page and that’s all it took to have me hooked. This book captivated my attention and captured my heart with its entire cast of players and their emotional journey. Despite a painful cliffhanger, which the author eased a bit by posting a book two teaser on her website, I am soooo glad I came across this story. I can’t wait for the second installment where I hope to see Callie and Kayden find their well deserved happily ever after. Loved it to pieces!!

Email ThisBlogThis!Share to TwitterShare to FacebookShare to Pinterest
Labels: 5 suns, arlene's review, jessica sorensen, the coincidence of callie and kayden