Review: A Veil of Glass and Rain by Petra F. Bagnardi 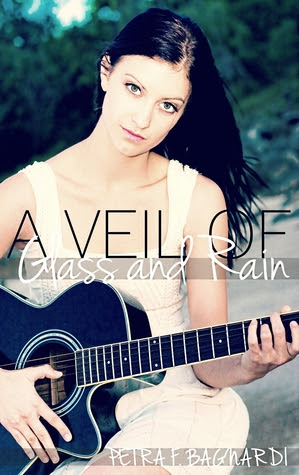 About the book:
Brina and Eagan meet for the first time when she's nine and he's fourteen. They like each other from the very beginning, although their bond isn't immediate, but it grows over the years. What links them is the fact that their parents are photographers and are extremely devoted to their work and to each other; so much so that both Brina and Eagan have to learn how to take care of themselves from a very young age. Despite their differences, age, gender, nationality, Brina is Italian and Eagan is American, they find comfort in their growing friendship. Then Brina becomes a teenager, and her feelings for her friend start changing and deepening. New desires stir within her. As soon as Brina realizes how those feelings complicate her friendship with Eagan, she runs away from him.A few years later, Brina is twenty and Eagan is twenty-five, they find one another once again. Brina is studying cinema in Rome and she's also trying to become a musician. Eagan begins to work as an architect in the same city. Eagan wants to be a part of Brina's life anew. Brina, however, is still in love with him; she finds it difficult to act merely as a friend and she keeps pulling away.Set in the beautiful Rome, this is a sensual and romantic story of friendship and love.

My Thoughts:
I love the premise of this book.  I'm a sucker for the friends to lovers story line.  And it was easy to be sucked into Brina and Eagan's story.

Brina and Eagan grew up together because their parents (travelling photographers) were friends.  They shared a bond because of their parents always being gone and became their own kind of 'family'.  But as they get older, Brina develops more feelings for Eagan, and scared that he doesn't feel the same way, she bolts.

Later on, they end up back in Rome together and Eagan is determined to have Brina back in his life.  But she is hesitant because she still has feelings and isn't sure where they stand.

What I loved about these two was their intense love and friendship.  Where some may think it's really unhealthy to depend on someone else - their dependence on each other worked for me. I understood the need they had to be together and how it felt for them to be apart.  Their relationship was really beautiful.

Add to that the suspense of them giving into their feelings for each other.  I love that in a book and there was quite a build up that kept me glued to my Kindle.  The story was very fast-paced and hard to put down!

My only major issue with the book was how much it jumped around.  I don't know if, because it was an ARC, I wasn't able to decipher where the breaks were very well.  The story was all over the place in the beginning with the flashbacks to their childhood, and there were many times I wasn't sure if I was in the present or the past.  I understood the significance of the flashbacks, but the first 1/4 of the book left me really confused.  Once I got past that - I devoured the rest of the  book in a day!


Overall, I enjoyed reading this very intense love story.  It says something when I devour a book in two days.  Thank you to the author for giving me the opportunity to read an ARC of the book!

Email ThisBlogThis!Share to TwitterShare to FacebookShare to Pinterest
Labels: 3.5 suns, a veil of glass and rain, brandie's review, petra bagnardi