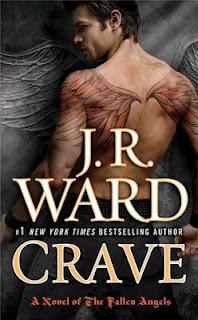 
About the book
Seven deadly sins. Seven souls that must be saved. One more no-holds- barred battle between a fallen angel with a hardened heart and a demon with everything to lose.

Isaac Rothe is a black ops soldier with a dark past and a grim future. The target of an assassin, he finds himself behind bars, his fate in the hands of his gorgeous public defender Grier Childe. His hot attraction to her can only lead to trouble-and that's before Jim Heron tells him his soul is in danger. Caught up in a wicked game with the demon who shadows Jim, Isaac must decide whether the soldier in him can believe that true love is the ultimate weapon against evil.


My Thoughts
Crave is a great installment to the Fallen Angels series by J.R. Ward. This is the second time I’ve noticed that this author seems to hit her stride after the first book. She does a much better job in this book of developing the characters, carrying the plot to an even more intriguing level and infusing just the right amount of back-story to make you feel like you’ve comfortably falling into the storyline.

Not sure how this happened, but in this book I’m actually feeling compassion toward Devina. The poor demon has OCD, she has to see a therapist for her hording issues, and she’s fallen for the one person that can define the future of humanity, thus stripping her of her powers and possibly existence. Now, I don’t agree with what she’s doing and how she treated Jim in this book, but she periodically reveals her moments of weakness in a way that I can’t help but want to fist bump her when she scores one for her team.

I’m surprised with how my feelings toward Adrian changed in this book. I didn’t care for him too much in the book because of how he betrayed Jim by practically carrying him into the demon’s lair, but in this book when Jim is rescued, Adrian shows his shift in loyalty and commitment to Jim, which was quite redeeming. I like Jim a lot more in this book, but I don’t feel he did much to score one point for the good side, so the outcome didn’t surprise me. Eddie was steady as always, which I sort of feel like he’s become my favorite of this band of do-gooders.

I liked how this installment included a military feel where Jim is presented with his second opportunity to influence the course of humanity where the ultimate outcome is either redemption or condemnation. In Crave we meet Isaac and Grier (love that name btw) and they are being targeted because Isaac is fleeing from the XOps. This book provides a ton of action and before you know it, the ride is over. Very fast paced IMO and overall, I’m pleased with how this series is progressing. I can’t wait for the next book.
4 Suns