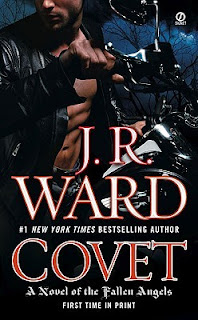 About the book
Redemption isn’t a word Jim Heron knows much about—his specialty is revenge, and to him, sin is all relative. But everything changes when he becomes a fallen angel and is charge with saving the souls of seven people from the seven deadly sins. And failure is not an option. Vin DiPietro long ago sold his soul to his business, and he’s good with that — until fate intervenes in the form of a tough- talking, Harley-riding, self-professed savior. But then he meets a woman who will make him question his destiny, his sanity, and his heart—and he has to work with a fallen angel to win her over and redeem his own soul.

Interesting new series by J.R. Ward, but not quite as captivating as her Black Dagger Brotherhood series. However if you’re a die-hard fan of this author, I think The Fallen Angels series will keep you entertained as you wait for the release of the next BDB book.

Covet did suffer from a slow start, and I had a little issue with the setting and surrounding characters paralleling the BDB universe. I would have preferred for this series to stand on its own in that respect.

In addition, I’ve never been a huge fan of the whole fallen angels concept, but then again, I’ve only tried the YA attempts and the two that I’ve read were pretty much disappointing.  The concept of this book takes a while to grasp and digest and the characters aren’t anything extraordinary or squee-worthy really, but in the end, you have to admit it was slightly entertaining.

I liked Jim, but not as a MC, so we’ll see if I decide to go along with him on his journey as he’s chosen for possessing two halves, both good and bad in equal measure, and is presented with seven chances to influence his fellow man; and if he performs as the ‘good’ angels believe he will, the outcome shall save the souls in question and they shall prevail over the other side of life, ultimately allowing humanity to continue to thrive.

Seems like a far stretch, but overall you get caught up in the lives of those Jim is trying to influence, so the story eventually falls into place. Interesting and better in terms of other stories I’ve read on fallen angels, but still not high on my rating scale.
3 Suns