Review: Out in Blue by Sarah Gilman

Today, Waves of Fiction is joining the blog tour for Out in Blue by Sarah Gilman hosted by Entangled Publishing 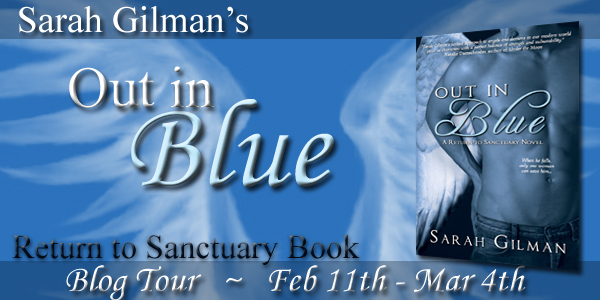 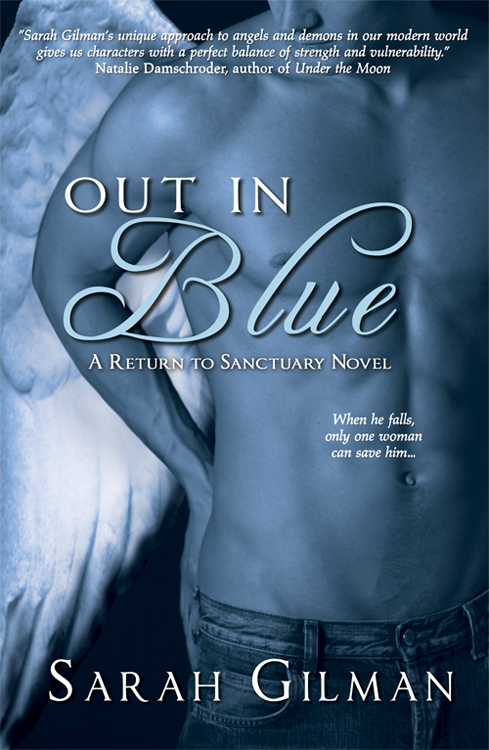 Out in Blue by Sarah Gilman
Re-released on January 13, 2013 by Entangled Select
Purchase: Amazon / Barnes and Noble / The Book Depository

About the book
In a violent world where fallen archangels are hunted for their valuable plumage, Wren knows one thing for certain: the human woman who saved him from a poacher attack will die if she stays with him. The demon responsible for his parents' gruesome deaths two decades ago pines for the chance to rip apart any woman who stands under Wren's wing. Wren doesn't expect Ginger to stay by his side once she discovers his ability to drain life with a mere touch, yet she lingers. When an unusual talent of her own reveals the location of Wren's father, Wren's isolated world implodes. With the help of the demon protectors he's sworn never to trust again, Wren risks everything to rescue his father, confront the demon who stalks his and Ginger's every step, and claim his eternity with the most courageous woman he's ever known.

My Thoughts:
If you have read my previous review of Wings of Redemption, then you know that I love the world that Sarah Gilman has created.  It is unique and just beyond amazing.  Out in Blue is another glimpse into this brilliant world and I am happy to say that I.STILL.WANT.MORE!

Out in Blue is not connected to Wings of Redemption, the story is completely separate just set in the same world.  In this story we have Ginger, a human who has been raised by a Demon and understands that cruel world she lives in is not right.  When fate has her over hearing a conversation she runs to warn the lost archangel, Wren, that his life is in danger.  What plays out is a wonderful story about love and acceptance.  Wren knows that he has to banish the target on his back before ever allowing Ginger to stand by his side, and Ginger in turn is ready to help Wren eliminate the threats that will force them apart.

I really enjoyed this story. It was very intricate and at some points I wasn't exactly sure how things happened but that was okay because I was totally sucked into the story.  I really liked that Ginger stood up for what she believed and that she was strong enough to hold her own when it came to what she wanted.  Wren was another great character and I truly felt that these two were meant for each other.

There was a part at the end that did confuse me.  The story stayed on course with the bad guy and had a great twist, but then the focus shifted a bit and I am not sure as to why certain characters were brought in.  Wren at one time tried to conceive a child with another archangel named Trinity.  I won't go into the why it didn't work because I am trying not to spoil too much but when we see Trinity in the story she just didn't fit with the storyline.  She kinda popped in outta nowhere in my opinion and then left just as suddenly.  I would have preferred for the story to have stayed on course and not veered.

Other than that small little detour in the story I truly loved everything else about this book.  I really do want more from this world and I hope someday we get to see more of Jett!

Praise for Out in Blue:
“Out In Blue is an exceptional surprise! It's tame enough to fall under a young adult novel but has the masterful writing of an adult paranormal romance. The story immerses you into the author's alluring world and into the action from the first pages and makes it hard to put down! The secrets revealed and unexpected twists will keep you from guessing how the story ends. Filled with action, suspense and romance, Out In Blue is a unique take on the much explored angel and demon theme that will enthrall you with its emotion and element of surprise!” Lori from Romancing the Darkside 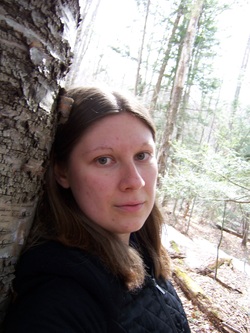 Sarah Gilman started her first novel in third grade. She never finished that story, but never gave up the dream. Her fascination with wings also began at that age, when images of the ancient Egyptian goddess Isis captured her imagination and never let go. Now a paranormal romance writer, she employs her love of writing to bring the allure of winged creatures to the pages of her novels. Sarah lives in Vermont with her supportive husband and two spoiled cats.
Twitter / Blog / Goodreads