Review: Daisies in the Canyon by Carolyn Brown 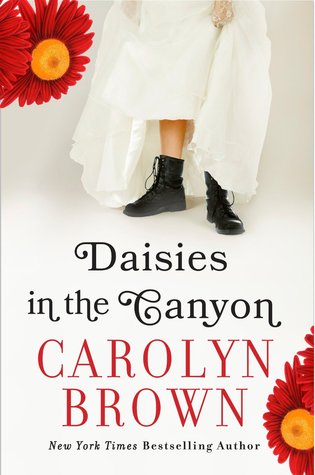 She’s here to claim her birthright…
Ex-army sergeant Abby Malloy feels no loss after the father she never knew passes away. Still, part of Ezra Malloy’s ranch belongs to her, and if the stubborn blonde has to live there for a year with two half-sisters who are strangers to her, so be it. Nothing could stand in the way of her inheritance…except a local sheriff wrapped in snug blue jeans and a sexy grin.
He’s here to claim her heart…
Cooper Wilson, the local sheriff and rancher next door, is having his world turned upside down. Abby is all straight talk and sweet, lush curves—the kind of woman who gets under his skin in just the right way. Whereas Cooper has roots in Palo Duro Canyon, Abby’s got wings. But he knows she belongs here. If she can stop running from her past, he’ll happily lead her to a brighter future, one hot cowboy kiss at a time.

My Thoughts:
I just loved this cowboy romance!  Daisies in the Canyon made me want to sell my house, buy a ranch and move out to the country! With my own sexy cowboy to help, of course!

Abby Malloy has just come out of the army and got word the father she never laid eyes on, Ezra Malloy, died and left her part of his ranch.  Abby can’t think of her father without bitterness and anger bubbling up and who could blame her? The man gave her mother divorce papers and a settlement once Abby was born, finding out she was a girl.  Ezra wanted a boy, an heir. Turns out she’s not the only one who suffered this rejection. Ezra did this to two other women and Abby meets the sisters she never knew she had, Shiloh and Bonnie, at his funeral. Abby has no intention of getting close to them or to Cooper, the sheriff/rancher/neighbor that shows up at every turn, setting her insides on fire with desire.

To inherit the Malloy Ranch the sisters must live there for a full year.  All three are determined to stay and learn ranching, but it is not an easy job. Fortunately, the girls are not afraid of hard work, something that Ezra probably didn’t count on, and they gradually become close.

I adored the developing sister relationship and the support they supplied each other.  Their circumstances were actually set up so that if they didn’t get along it would be more profitable for them in the long run, but their sisterly relationship ranked above greed. They all had a common hurt: Ezra, so they bonded over those feelings. Respect and love grew quickly.  I have to say that Ezra’s decision to fling off his offspring just because they were girls angered me! The hurt of this rejection would have to cut deep, but I can’t help but think he was the loser in the end.  The girls were all amazing women in their own right, and he missed out on knowing and loving them.

The romance between Cooper and Abby was a total win for me, and had me smiling and laughing throughout the book! They fell into lust quickly when they couldn’t keep their hands off each other, but then Abby and Cooper took a step back and settled in to take things slow, as friends. Flirty, fun friends with an insane amount of attraction! Their romance was filled with humor that had me giggling more than a few times:

“Abby, you are drunk.”
“I’m not drunk.  Do you need glasses?  I told you I can hold my liquor.”
“Why would I need glasses?”
“To see that I’m not drunk. Did I tell you that the bull rang the doorbell and that I think you are sexy and it would be easy to fall in love with you and good night, Cooper?”

Cooper was smart to back off, sensing Abby’s cold feet. I think he would’ve spooked her off if he didn’t put the brakes on.  Instead he teased, flirted, and they got to know each other while the stoking embers into a raging fire.  I appreciated there was no third party thrown in for drama, just realistic concerns that could plague any normal couple.

With Abby’s story happily complete, there were hints of a coming romance for Shiloh.  I had suspicions about one for Bonnie, too, but I suspect Shiloh’s romance will be next.  At least I hope so. I didn’t see any plans for a book two or three in the works.
Ms. Brown captured my heart and my cowgirl-soul with her heartfelt cowboy romance!  For anyone who dreams of living on a working ranch, open pastures, beautiful sunsets, close knit friends and neighbors, Daisies in the Canyon is a perfect fit!

After reading and loving Daisies in the Canyon I went back and purchased Long, Hot Texas Summer which features the second chance romance between Loretta and Jackson, Malloy Ranch neighbors who show up in this story.  It was $2 on Amazon and I added the audio version for an additional $1.99 which is a steal of a deal!