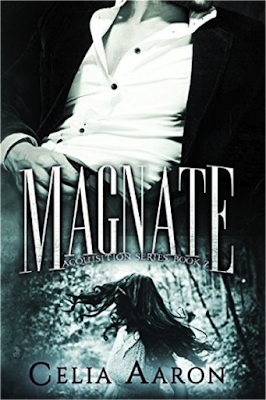 Lucius Vinemont has spirited me away to a world of sugar cane and sun. There is nothing he cannot give me on his lavish Cuban plantation. Each gift seduces me, each touch seals my fate. There is no more talk of depraved competitions or his older brother – the one who’d stolen me, claimed me, and made me feel things I never should have. Even as Lucius works to make me forget Sinclair, my thoughts stray back to him, to the dark blue eyes that haunt my sweetest dreams and bitterest nightmares. Just like every dream, this one must end. Christmas will soon be here, and with it, the second trial of the Acquisition.

Just as good as the first book, but still I need more!! Magnate is the second installment in the Acquisition series, and where I might have gotten a little more details about the dark rules to this game, I know the worst is still to come. Absolutely engrossing and disturbing!!

In book two of the Acquisition series, we witness Stella take part in the second of a four-part game that she is bound to for a year. The Sovereign calls the shots, and Sinclair Vinemont is doing his part to make sure his family wins this barbaric and sadistic game of power.

In Magnate, we got to see more of Lucius and Teddy Vinemont, who are Sin’s brothers. They each have a part in this antiquated game of supremacy, but in no way do they know how it will all play out. Only the eldest brother, Sinclair, is privy to the rules of the Acquisition.

The second game had me at the edge of my seat. I really thought when Stella partnered with her fellow Acquisition Gavin, they might have a chance to come out somewhat unscathed. What a mind fuck! I was absolutely captivated throughout this whole story. I want to know more… about Gavin, the rest of the games, how Sinclair will see it through and ultimately what will happen to Stella when it’s all over. I have no doubt she’ll survive, but at what costs???

I keep going back and forth as to whether I want her to stay with Sin. My mind says absolutely NOOO, but a piece of my heart knows that Sin has more he wants to give, but just can’t at this point in the games. Again… a true mind fuck in the best way possible! I need book three NOW!!
4 Suns