Review: The Best of Us by Robyn Carr 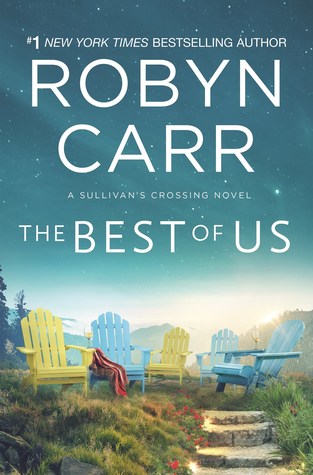 In Sullivan’s Crossing, #1 New York Times bestselling author Robyn Carr has created a place where good people, powerful emotions, great humor and a healthy dose of common sense are the key ingredients to a happy life. Sullivan’s Crossing brings out the best in people. It’s a place you’ll want to visit again and again.

Dr. Leigh Culver loves practicing medicine in Timberlake, Colorado. It is a much-needed change of pace from her stressful life in Chicago. The only drawback is she misses her aunt Helen, the woman who raised her. But it’s time that Leigh has her independence, and she hopes the beauty of the Colorado wilderness will entice her aunt to visit often.

Helen Culver is an independent woman who lovingly raised her sister’s orphaned child. Now, with Leigh grown, it’s time for her to live life for herself. The retired teacher has become a successful mystery writer who loves to travel and intends to never experience winter again.

When Helen visits Leigh, she is surprised to find her niece still needs her, especially when it comes to sorting out her love life. But the biggest surprise comes when Leigh takes Helen out to Sullivan’s Crossing and Helen finds herself falling for the place and one special person. Helen and Leigh will each have to decide if they can open themselves up to love neither expected to find and seize the opportunity to live their best lives.

My Thoughts:
At thirty-four Dr. Leigh Culver has all but given up on marriage and children, and she’s been okay with that finding fulfillment as a doctor. Leigh didn’t expect to find herself wrapped up in an all-consuming kind of romance with Rob Shandon, the local pub-owner.  No one has revved her up as much and they just can’t get enough of each other!  But it’s more than just the physical, they click mentally, too.  Leigh feels so much it scares her, so she’s determined to be sure before she rushes into anything.

Rob Shandon lost his wife nine years ago and had to go it alone with two young boys. He’s fine with casual dates here and there, until Leigh.  He’s seen her around but when his oldest boy has a minor accident they collide and connect, and even though he still isn’t keen on anything serious like marriage he’s finding it harder to picture a future that doesn’t include Leigh.  They squeeze in lusty meet-ups whenever they can because they’re so crazy for each other!  Rob thinks he’s fine with keeping things the way they are until an unexpected turn of events has them thinking about more.

Leigh finds herself feeling vulnerable, and worried about the future which has her stalling at making any decision.  Her Aunt Helen (basically her mom) finally had to show her some tough love to shake some sense into Leigh. I didn’t blame Leigh, since I know from personal experience Highlight for spoiler: that hormones can make you crazy! Lol! End of spoiler So I can excuse her thinking.  Plus, she didn’t dilly dally that long.

It always feels like coming home to family and friends I love when I crack open one of Robyn Carr’s books. I was pleased to get more of Sullivan’s Crossing in this installment since Sully finally had his own romance with Leigh’s aunt.  Sullivan’s Crossing sounds like an amazing place if you love hiking and camping or just enjoy the outdoors.  It’s a campground, general store, post office, and more, where The Continental Divide Trail and The Colorado Trail intersect. I love how Leigh’s Aunt Helen, a world traveler and mystery writer, succumbed not only to Sully’s charms, but to the charm and beauty of this magical place! The Best of Us is the fourth installment in the Sullivan’s Crossing series, and it’d work okay as a stand-alone, but you’d get more enjoyment starting from the beginning, which I don’t consider a hardship since I love this series!