Review: The Boy by Tami Hoag 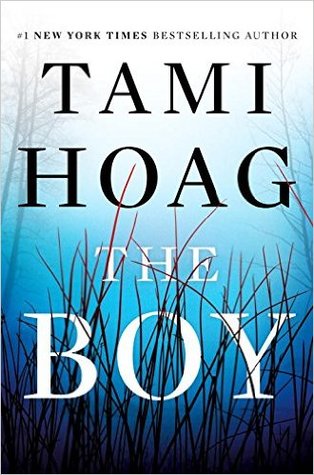 An unfathomable loss or an unthinkable crime? Number one  New York Times  bestselling author Tami Hoag keeps you guessing in her most harrowing thriller yet.

A panic-stricken woman runs in the dead of night, battered and bloodied, desperate to find help. . . .

When Detective Nick Fourcade enters the home of Genevieve Gauthier outside the sleepy town of Bayou Breaux, Louisiana, the bloody crime scene that awaits him is both the most brutal and the most confusing he's ever seen. Genevieve's seven-year-old son, P.J., has been murdered by an alleged intruder, yet Genevieve is alive and well, a witness inexplicably left behind to tell the tale. There is no evidence of forced entry, not a clue that points to a motive. Meanwhile, Nick's wife, Detective Annie Broussard, sits in the emergency room with the grieving Genevieve. A mother herself, Annie understands the emotional devastation this woman is going through, but as a detective she's troubled by a story that makes little sense. Who would murder a child and leave the only witness behind?

When the very next day P.J.'s sometimes babysitter, thirteen-year-old Nora Florette, is reported missing, the town is up in arms, fearing a maniac is preying on their children. With pressure mounting from a tough, no-nonsense new sheriff, the media, and the parents of Bayou Breaux, Nick and Annie dig deep into the dual mysteries. But sifting through Genevieve Gauthier's tangled web of lovers and sorting through a cast of local lowlifes brings more questions than answers. Is someone from Genevieve's past or present responsible for the death of her son? Is the missing teenager, Nora, a victim, or something worse? Then fingerprints at the scene change everything when they come back to a convicted criminal: Genevieve herself.

The spotlight falls heavily on the grieving mother who is both victim and accused. Could she have killed her own child to free herself of the burden of motherhood, or is the loss of her beloved boy pushing her to the edge of insanity?  Could she have something to do with the disappearance of Nora Florette, or is the troubled teenager the key to the murder? How far will Nick and Annie have to go to uncover the dark truth of the boy?

My Thoughts:
A seven-year-old boy is brutally murdered, while his mother escapes injured and bloodied.   As disturbing and puzzling facts come to light it’s up to Detectives Nick Fourcade and Annie Broussard sort them out, find the killer and bring him to justice.  Solving the case is made more difficult by the new sheriff of Partout Parish who loves to make a show for the press all the while butting in and trying to control investigative procedure.

I first met Nick in Annie in A Thin Dark Line published back in 1997. Not exactly sure when I read it, because it was before Goodreads, but Annie was a new cop in the Partout Parish who became embroiled in a sick and twisted murder.  There’s an immediate spark between Annie and Nick; their romance felt dangerous and passionate, and at the time ill-advised, but it was thrilling!  I was so excited to find they had a new story coming, now married for six years with a five-year-old son.  Neither are perfect, but they’re perfect for each other, and I loved their dynamic, whether working together or trying to get by as a married couple while dealing with a high-profile case.  There’s electricity in the air every time they’re together!

Oh, there are so many twisted and tangled webs to unravel! One of the things I love about Tami’s mysteries is that she can make you feel for her characters, see things from their side, even when their actions are questionable or even when they’re downright wrong.  There are so many disturbing facets here that are, unfortunately, common in real life.

The Boy was a gift to Ms. Hoag’s long-time fans! I loved getting back to Annie and Nick, but even if you haven’t read the first book, it’s a mystery that’ll keep you glued to the pages! It’s a story that’ll have you thinking about it long after you’ve read the final page!  I hope we get more Annie and Nick in the future!