Review & Giveaway: Only For You by Barb Curtis 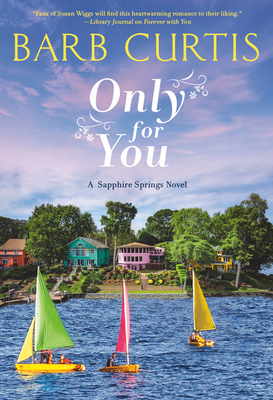 Only For You (Sapphire Springs #2) by Barb Curtis
Publication Date: July 27th 2021 by Forever
Pages: 319
Source: Publisher
Rating: ★★★★
Links: Amazon | Barnes & Noble | Kobo | Goodreads
My Thoughts:
Emily Holland has been in love with Tim Fraser since high school, but he never got the hint. It seems she’ll never move out of the friend zone with him. Emily’s unrequited yearning breaks her heart and makes it impossible to move on keeping things status quo.  Emily’s made it her New Year’s resolution to limit ties with Tim so she can finally move forward and find love.  However, Tim’s messy, very public breakup has him proposing a crazy idea.
Tim isn’t one for a HEA after seeing how his parent’s relationship play out. He took a chance with Melissa, but that ended in disaster when she decided to go on a reality TV show and then break it off with him on camera to pursue a relationship with another guy. What a creep, right?! Well, the publicity created hype and shenanigans for Tim, and he’s hit with an onslaught of media and crazy women who
want to step in and “cure” his heartache. He wants the whole thing to go away and decides that a fake relationship would help keep the propositions at bay, and his bestie Emily seems perfect for the role.
Unrequited love is a special kind of heartache! I’ve felt it personally so when I read about it, I want the characters to wake up, realize what they’ve been missing and grab on! Emily initially refuses the ruse, as she doesn’t want to risk her heart anymore, but a situation makes her reconsider. Plus, as her friend points out maybe Tim will finally wake up and see how perfect they’d be together.
My heart ached for Emily, and I was so happy when Tim finally started t see her as a desirable woman! The shake up couldn’t have happened at a better time when both Emily and Tim, as Sapphire Springs council members, are thrown into festival planning for the town’s maple syrup harvest. It’s summer and hot where I live, but all the activities made me wish I was in blustery small town enjoying the wintery festivities!
Tim and Emily spent time planning for the festival, magical dates that had them falling harder with every moment spent together! They were perfect for each other, but Tim needed to get out his own way before they could find their HEA. There was a time or two I wanted to shake Tim! Thankfully, he wasn’t stupid for too long!
Only For You was a lovely romance featuring unrequited love in a way I could easily relate to, bringing back all those feelings of longing in the past. Of course, Tim and Emily found their way to each other, this is a romance after all, and I was thrilled to take the journey with them!
4 Stars

Barb Curtis returns to Sapphire Springs with this heartwarming romance where a small-town bakery owner finds herself in a fake relationship with the man she's always pined after.

Will a fake relationship between two friends lead to true love?

After having his heart broken on national television, Tim Fraser knows only one way to stop the gossip about his love life-a new girlfriend. The problem is, he's done with romance forever. A fake relationship with his friend and Sapphire Spring's sweetest baker, Emily Holland, seems the perfect solution to getting rid of his newfound fame, but their fleeting fauxmance is stirring up the kinds of feelings Tim has sworn off for good.

Emily has secretly lusted after Tim for years, but pretending her feelings are all for show never factored into her fantasy. Still, her decades-long crush makes it impossible to say no to Tim's proposal. But with each date, the lines between pretend and reality blur, giving Tim and Emily a tantalizing taste of life outside the friend zone . . . if they can find the courage to give real love a chance.

The lovely people of Forever have provided a copy of Only for You to one lucky reader.  The giveaway is open to US residents only. Good luck!
a Rafflecopter giveaway
Posted by Rachel @Waves of Fiction at 12:29 AM