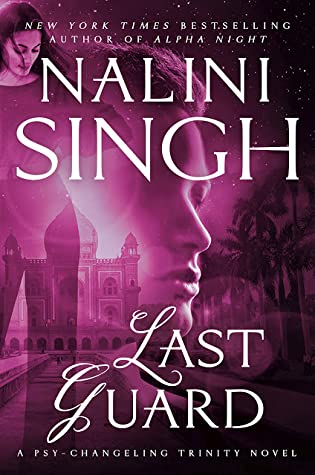 Last Guard (Psy-Changeling Trinity #5) by Nalini Singh
Publication Date: July 20th 2021 by Berkley Books
Pages: 384
Source: Publisher
Rating: ★★★★★
Links: Amazon | Barnes & Noble | Kobo | Goodreads
My Thoughts:
The PsyNet is sick, and the Ruling Coalition are aware, but they’ve never really considered a crucial part of its foundation: The Anchors. These Anchors are a big part of what’s been keeping it stable, but they’re all stretched to capacity. Canto Mercant, an Anchor, realizes their error and seeks out another powerful Anchor, Payal Rao, to form a coalition with other Anchors to find a solution. Canto doesn’t realize Payal is the girl from his broken past. A girl he’s spent years searching for. They cared for each other in a dire situation, and the bond created from the experience is deep. Now meeting again as adults there is an undeniable magnetic pull between them, an instant attraction.
Loved all the bits with the bears! Canto was basically claimed as a member of those misbehaving, lovable bears. And the Mercants, so fiercely loyal!  Ena Mercant, the powerful matriarch, supposedly Silent, had a big savage heart ready to fight tooth and nail for anyone in their circle!
Last Guard grabbed and held my attention from the first page! I enjoyed the romance between Canto and Payal, but all the side conflicts: the Anchor issues with the PsyNet, the struggle to keep it from collapsing and Payal’s ruthless family and her constant need to be on guard kept me on the edge of my seat! I had to read on to see what would happen! Absolutely loved this installment, and while Canto and Payal’s story came to a satisfying conclusion, the survival of the PsyNet still remains in question, so I can’t wait for the next story!
5 Stars

New York Times bestselling author Nalini Singh returns to a world devastated by change in her award-winning Psy-Changeling Trinity series, where two people defined by their aloneness hold the fate of the Psy in their hands…

Termed merciless by some, and a robotic sociopath by others, Payal Rao is the perfect Psy: cardinal telekinetic, CEO of a major conglomerate, beautiful—and emotionless.

For Canto Mercant, family and loyalty are everything. A cardinal telepath deemed "imperfect" by his race due to a spinal injury, Canto cares for the opinions of very few—and ruthlessly protects those he claims as his own. Head of intel of the influential Mercant family, he prefers to remain a shadow in the Net, unknown and unseen. But Canto is also an Anchor, part of a secretive designation whose task it is to stabilize the PsyNet. Now that critical psychic network is dying, threatening to collapse and kill the entire Psy race with it.

To save those he loves, Canto needs the help of a woman bound to him by a dark past neither has been able to forget. A woman who is the most powerful Anchor of them all: Payal Rao. Neither is ready for the violent inferno about to ignite in the PsyNet…or the passionate madness that threatens to destroy them both.