Review: The Heartbreaker of Echo Pass by Maisey Yates 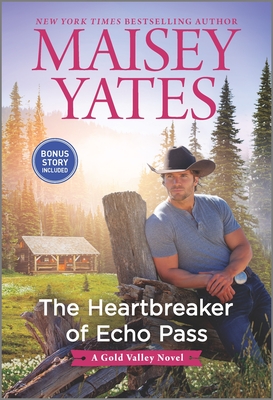 The Heartbreaker of Echo Pass (Gold Valley #12) by Maisey Yates
Publication Date: June 29th 2021 by HQN
Pages: 384
Source: Publisher
Rating: ★★★★
Links: Amazon | Barnes & Noble | Kobo | Goodreads
My Thoughts:
Iris Daniels has long felt like she was second best. Not as vibrant as her sisters and mostly valued because of her usefulness to the family. Iris was the oldest sister when they lost their parents, and at fourteen she stepped in as sort of the mother while her older brother, Ryder assumed the role of guardian at the young age of eighteen. But who was there to comfort and mother Iris? Seeing all her siblings find love and happiness Iris is determined to take her life out of pause and do something just for herself. She knows she’s good at cooking and baking and has the perfect place in town to set up shop. Trouble is the rent the new owner is charging is prohibitive.
Iris finds out that the new owner is a hermit living up at a remote mountain cabin and decides to strike up a deal with him. She figures this guy is an old curmudgeon, but is shocked to find a much younger, grumpy man. His big, burly, bearded, but underneath that gruff appearance he’s the most handsome man she’s laid eyes on, and she wants!
Griffin bought his mountain property to get away from all the prying and pity and to wallow in his grief. Iris throws a wrench in works when she shows up with her cookies and determination. Theirs was a passionate romance, electricity sparking between them from that very first meeting!
I’ve long been a fan of Maisey Yates’ romances. The Heartbreaker of Echo Pass was heartfelt and emotional. Iris understands grief and so recognizes it clearly in Griffin, and my heart broke for everything they had endured.  They shared a bond and struck up a friendship even though he’s pretty grumpy at first. Hard not soften up when being plied with delicious food and treats!  I was hungry just reading!
I fell hard for Griffin, because once Iris showed up it was like he woke up from the five years he’d just been existing, and he was all in.  I could tell Iris was going to give some trouble, but luckily, she had a lot of good advice from her close-knit, loving family.
The Heartbreaker of Echo Pass is the twelfth book in the series, but it can be read as a standalone in a pinch. However, you’ll miss some of Iris’ history and the sibling’s romances.
4 Stars

Shy Iris Daniels is on a mission to shake up her life. She’s sick of being underestimated, and she’s got a new business plan to prove it. The one thing she didn’t factor in is her new landlord, Griffin Chance. The gruff mountain man isn’t what she expected, but Iris recognizes the pain in his eyes. Yet the attraction he ignites is much more unfamiliar…and might be the perfect chance for Iris to embrace the adventure she yearns for.

Griffin Chance knows firsthand how senseless the cards dealt in life can be. He wouldn’t have isolated himself on a remote mountain ridge if he didn’t. Innocent Iris craves excitement, and he’s a man who thought he’d forgotten how to feel. But when their connection grows deeper than either of them anticipated, Griffin has to decide if he can put down the pain of his past and step into a love he never believed possible.