I guess you can call me an inconsistent fan of Nicholas Sparks where I have a love/hate relationship with his books. I either really like them or have the urge to toss them out the window. However, I'm always one of the first in line to catch his books translated to film. So, when I heard his more recent novel, The Longest Ride will be hitting the big screen, I immediately picked up the book so I can enjoy the movie when it releases!

Well, The Longest Ride movie release is next week - April 10, 2015, so I thought I'd share a bit about the book, my review, and the movie trailer. Enjoy! 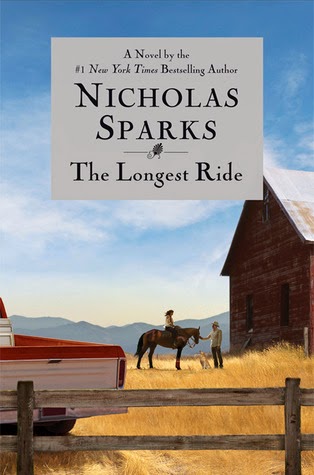 The Longest Ride by Nicholas Sparks

Ira Levinson is in trouble. At ninety-one years old, in poor health and alone in the world, he finds himself stranded on an isolated embankment after a car crash. Suffering multiple injuries, he struggles to retain consciousness until a blurry image materializes and comes into focus beside him: his beloved wife Ruth, who passed away nine years ago. Urging him to hang on, she forces him to remain alert by recounting the stories of their lifetime together – how they met, the precious paintings they collected together, the dark days of WWII and its effect on them and their families. Ira knows that Ruth can’t possibly be in the car with him, but he clings to her words and his memories, reliving the sorrows and everyday joys that defined their marriage.

A few miles away, at a local rodeo, a Wake Forest College senior’s life is about to change. Recovering from a recent break-up, Sophia Danko meets a young cowboy named Luke, who bears little resemblance to the privileged frat boys she has encountered at school. Through Luke, Sophia is introduced to a world in which the stakes of survival and success, ruin and reward -- even life and death – loom large in everyday life. As she and Luke fall in love, Sophia finds herself imagining a future far removed from her plans -- a future that Luke has the power to rewrite . . . if the secret he’s keeping doesn’t destroy it first.

Ira and Ruth. Sophia and Luke. Two couples who have little in common, and who are separated by years and experience. Yet their lives will converge with unexpected poignancy, reminding us all that even the most difficult decisions can yield extraordinary journeys: beyond despair, beyond death, to the farthest reaches of the human heart.

My Thoughts
I’ve had a long reading relationship with Nicholas Sparks, and the best way I can describe it is unpredictable. Going into his each of his books, I never doubt he has a good story to tell. However, that story is not always for me. It unusually ends in one of two ways… I either hate it or love it. My most recent experiences have fallen a bit short, so going into The Longest Ride it’s no surprise that I was skeptical. With the movie being right around the corner, and the trailers seeming to be appealing, as I’ve said before, I can’t in good-book faith see the movie without reading the book first.

Thankfully, The Longest Ride was absolutely perfect! Probably my first, hopefully not my last, 5 star rating for Sparks. This novel is definitely my favorite by Sparks and I canNOT wait to see the movie.

The Longest Ride shares two parallel stories that I’ll only touch upon briefly because I don’t want to give anything away.

The first story is of Ira Levinson, who is a ninety-one year old widower that has careened off a snowy embankment and is stranded waiting for help. As the hours and cold set in, the outlook is bleak and daunting. However, it’s during Ira’s most desperate moments that his wife Ruth that passed away nine years ago appears to him and together they reminisce about the life they shared together prior to her passing.

The second story occurs miles away between a cowboy, bull-rider named Luke and a college student named Sophia. They meet at a rodeo and soon strike up an unbreakable bond and heartfelt romance that’s not without its fair share of struggles and hardships.

As these story-lines progress, we get to know these two couples and all the while ponder how Sparks will merge their lives. Well, let me end by saying this, the crossroads for their stories was an amazing moment, and the twist at the end had me smiling, guffawing and pining to see the movie.

The Longest Ride is one of Sparks rare moments where I didn’t have the urge to fling the book out the window. Loved it!
5 Suns 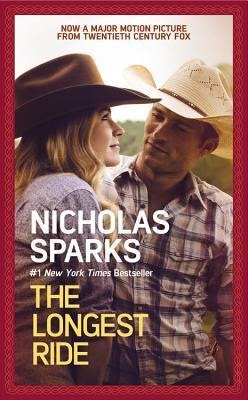 Movie Trailer
If you see the film, let us know what you thought!
Posted by SarleneS at 2:00 AM