Review: Everything I Never Told You by Celeste Ng 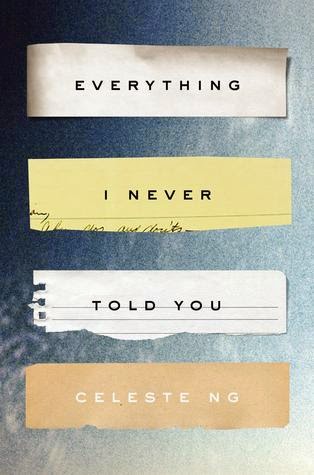 Everything I Never Told You by Celeste Ng

Lydia is dead. But they don’t know this yet . . . So begins this debut novel about a mixed-race family living in 1970s Ohio and the tragedy that will either be their undoing or their salvation. Lydia is the favorite child of Marilyn and James Lee; their middle daughter, a girl who inherited her mother’s bright blue eyes and her father’s jet-black hair. Her parents are determined that Lydia will fulfill the dreams they were unable to pursue—in Marilyn’s case that her daughter become a doctor rather than a homemaker, in James’s case that Lydia be popular at school, a girl with a busy social life and the center of every party.

When Lydia’s body is found in the local lake, the delicate balancing act that has been keeping the Lee family together tumbles into chaos, forcing them to confront the long-kept secrets that have been slowly pulling them apart.

Everything I Never Told You is a complicated story. I’m conflicted with how I feel about this novel, but one thing I can’t deny, Celeste Ng is a worthy author that can weave an interesting tale about complex family dynamics that involve death, racism, social pressure and so much more.

In Everything I Never Told You, we meet the Lee family when they discover their sixteen year old daughter is dead. The Lees are a mixed family in the 1970’s, which apparently is a time when interracial marriages could be deemed illegal. James is Chinese and Marilyn is Caucasian. There is no doubt they love each other, but their family dynamics takes a drastic turn when they have children. The oldest, Nath, and youngest, Hannah resemble their Chinese father. The middle child, Lydia is a closer replica of their blue-eyed Caucasian mother.

For personal reasons I can’t quite comprehend, James and Marilyn make Lydia their token child, and she becomes the reluctant center of their universe. Their middle child represents a possibility to each of her parents. For her mother, Lydia has the opportunity to become what Marilyn never could, which was a doctor. She’s pressured academically to excel and assume her mother’s life goals. For her father, Lydia can create the image that her father longed for, which was to be socially accepted and popular. Together, these two parents create a nightmare experience for their young daughter, and neglect their other two in the process.

When Lydia is found dead in a nearby lake, her absence becomes a vacuum her family can't seem to fill. With two remaining children, you can’t help but feel sorry for how they are neglected. My heart broke for Nath and Hannah!

Overall, I struggled with this story for many subtle reasons. I can’t say that James and Marilyn were horrific parents, believe me I’ve met some pretty bad fictional parents in my reading lifetime. However, they certainly damaged and destroyed their children is so many subtle ways. It absolutely bothers me to read about children being abused, whether it be emotionally, psychologically or physically, and in this case it was the first two. Harsh!

I can’t say I enjoyed the fictional journey Ng created, but I have to admit she gave me a lot to think about. Good story that just wasn’t my cup of tea.
3 Suns

Email ThisBlogThis!Share to TwitterShare to FacebookShare to Pinterest
Labels: 3 suns, arlene's review, celeste ng, everything i never told you