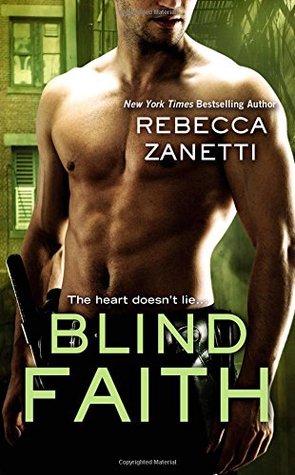 A betrayal he couldn't forget . . . For Nate Dean, love is a four-letter word. As part of a secret black-ops military unit, he and his brothers were genetically engineered by the government to be ruthless soldiers with an expiration date. They were loyal only to one another . . . until Nate laid eyes on the woman who stole his heart and blew his world apart. Now, years later, his family is still paying the price for his mistake. But as time runs out, there's only one person who can save his family: the very woman Nate swore he'd never trust again.

The moment Audrey Madison spies Nate across a crowded ballroom, she can barely breathe. He's just as undeniably sexy as she remembers, yet there's an edge to him now that's as irresistible as it is dangerous. When he asks for her help, Audrey can't refuse. But she has secrets of her own--secrets that, if Nate ever discovers them, may cost them both their lives . . .

My Thoughts:
Blind Faith continues the story of the Dean Brother’s who were raised to be super soldiers, but escaped to lead a normal life. Unfortunately, the cruel commander that oversaw the program in which they were born doesn’t want to let them go, and had chips implanted in them, scheduled to detonate in weeks if they don’t return to service.  Blind Faith is Nate’s story, the brother who sacrificed to give little bits of normal to his younger brothers, so they would know what it felt like to be loved and part of a family.  Something each one of them desperately craved.

Nate’s brothers are everything to him, but there is one woman he left behind that he can’t forget. Audrey Madison, the daughter of one of the doctors working at the base. Audrey broke up with Nate, and he’s angry with her for giving up.  But years later he needs her help to disable the deadly chips because they’re running out of time.

If you enjoy romantic suspense you definitely need to try the Sin Brothers series.  All of the books are filled with twists, thrills, and action, while not sacrificing the romance portion of the story. Sometimes with action/suspense stories, the romance is light or not well fleshed out, but that is not the case here. Nate and Audrey have a history and still have delicious chemistry in spite of their attempts to resist each other.  I love it when a couple work through the hurts of the past and let them go.  Once Nate and Audrey lay eyes on each other after spending years apart, there’s no going back.

While the danger with the commander and the chips has not past, Nate and Audrey’s romance wraps up nicely, and I just know the Dean Brothers will find a solution in the concluding book of the series, Total Surrender, which is already out.  I’ll be picking that up very soon.