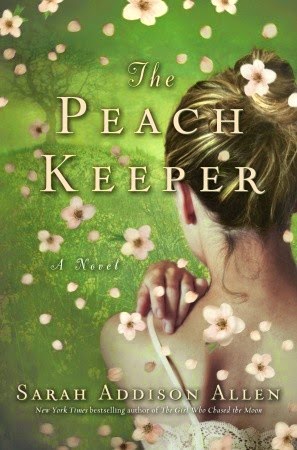 The New York Times bestselling author of The Girl Who Chased the Moon welcomes you to her newest locale: Walls of Water, North Carolina, where the secrets are thicker than the fog from the town’s famous waterfalls, and the stuff of superstition is just as real as you want it to be.

It’s the dubious distinction of thirty-year-old Willa Jackson to hail from a fine old Southern family of means that met with financial ruin generations ago. The Blue Ridge Madam—built by Willa’s great-great-grandfather during Walls of Water’s heyday, and once the town’s grandest home—has stood for years as a lonely monument to misfortune and scandal. And Willa herself has long strived to build a life beyond the brooding Jackson family shadow. No easy task in a town shaped by years of tradition and the well-marked boundaries of the haves and have-nots.

But Willa has lately learned that an old classmate—socialite do-gooder Paxton Osgood—of the very prominent Osgood family, has restored the Blue Ridge Madam to her former glory, with plans to open a top-flight inn. Maybe, at last, the troubled past can be laid to rest while something new and wonderful rises from its ashes. But what rises instead is a skeleton, found buried beneath the property’s lone peach tree, and certain to drag up dire consequences along with it.

For the bones—those of charismatic traveling salesman Tucker Devlin, who worked his dark charms on Walls of Water seventy-five years ago—are not all that lay hidden out of sight and mind. Long-kept secrets surrounding the troubling remains have also come to light, seemingly heralded by a spate of sudden strange occurrences throughout the town.

Now, thrust together in an unlikely friendship, united by a full-blooded mystery, Willa and Paxton must confront the dangerous passions and tragic betrayals that once bound their families—and uncover truths of the long-dead that have transcended time and defied the grave to touch the hearts and souls of the living.

Resonant with insight into the deep and lasting power of friendship, love, and tradition, The Peach Keeper is a portrait of the unshakable bonds that—in good times and bad, from one generation to the next—endure forever.

My Thoughts
“…If you’re lucky enough to find [true friendship], you hold on to it, hold on and never let it go…”

The Peach Keeper isn’t the first novel I’ve had the pleasure of experiencing by Sarah Addison Allen. I’ve read The Girl Who Chased the Moon and Garden Spells by her as well. However, I have to say that The Peach Keeper is by far my favorite.

This novel takes place in Walls of Water, North Carolina at a time when the Woman’s Society Club is planning their 75 Annual Gala. The Osgood family has decided to renovate The Blue Ridge Madame mansion, which is a historical landmark for the town. This grand home was abandoned when the Jackson family lost the house due to financial struggles. What Paxton, the current President to the Woman’s Club, doesn’t know are the deep seeded secrets that are buried in the house. They are soon unearthed when her brother comes to town to finish the agricultural renovations and uproots the peach tree on the property. When they dig a bit further, a human skeleton is revealed and the mystery of the place becomes the talk of the town.

I absolutely enjoyed this cast driven novel that revolved around the next generation children of the town that are in their early thirties. The Joker (Willa), Stickman (Colin), The Princess (Paxton), and The Freak (Sebastian) were a perfectly blended group of protagonists that each commanded the stage with their intriguing stories. I loved the chemistry between them and the way they ultimately formed a tight unit.

I also enjoyed the magical element infused in the novel. You had woman involuntarily admitting secrets, misplaced invitations, store bells ringing at random moments, party streamers floating in the air and let’s not forget the unique scents of lemon, cut grass, donuts and so much more that permeated the town.

The Peach Keeper is light, whimsical and romantic all at the same time, but at the core, it’s a story about the importance of friendship. True win in my book!
4 Suns