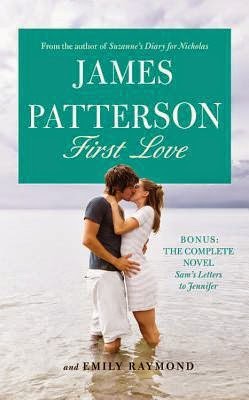 An extraordinary portrait of true love that will move anyone who has a first love story of their own. Axi Moore is a "good girl": She studies hard, stays out of the spotlight, and doesn't tell anyone how all she really wants is to run away from it all. The only person she can tell is her best friend, Robinson--who she also happens to be madly in love with.


When Axi spontaneously invites Robinson to come with her on an impulsive cross-country road trip, she breaks the rules for the first time in her life. But the adventure quickly turns from carefree to out of control after the teens find themselves on the run from the police. And when Robinson suddenly collapses, Axi has to face the truth that this trip might be his last.

A remarkably moving tale very personal to James Patterson's own past, FIRST LOVE is testament to the power of first love--and how it can change the rest of your life.

My Thoughts
Short yet sweet story about two young people who fall in love despite the challenges they hope to outrun.

I came across First Love and for a couple of reasons it caught my attention. First, I’ve seen it compared to the The Fault in Our Stars many times and second, there was a road trip in the story. Putting these two elements together, I was sure First Lovewould capture my interest.

In this novel, Axi Moore and her best friend Robinson decide to throw caution to the wind and take an epic road trip while time is still on their side. This decision is huge because everyone knows that Axi is the straight and narrow girl who gets good grades and always does what is expected of her. Her best friend Robinson is the charming boy who can get away with murder and charm the pants off of anyone.

As they make their plans and travel from the west to east coast, we get to experience Axi and Robinson’s love unfold along with the reasons that brought them together.

There were a few things that seemed a bit choppy with this story. I was surprised the author didn’t bother to make the story more believable when it came to the road trip and Robinson’s condition. I find it hard to believe that two teenagers can do so much in three weeks on such limited funds, as well as committing a few crimes along the way. What also caught me off guard was the sudden and drastic decline of Robinson’s condition. If this novel were a bit longer and better developed, I think their story would have been more plausible and believable.

Overall, this was a quick and heartfelt story despite its flaws. I’m always a sucker for dramatic endings and romance, so it wasn’t too bad… just could have been so much better.
3 Suns