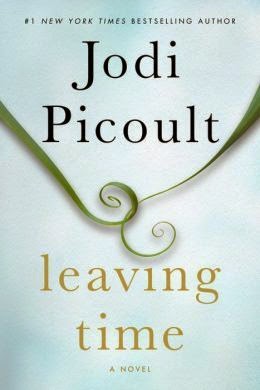 For over a decade, Jenna Metcalf obsesses on her vanished mom Alice. Jenna searches online, rereads journals of the scientist who studied grief among elephants. Two unlikely allies are Serenity Jones, psychic for missing people who doubts her gift, and Virgil Stanhope, jaded PI who originally investigated cases of Alice and her colleague. Hard questions and answers.


My Thoughts
“Where there is support, there is no grief.”

“If you think about someone you've loved and lost, you are already with them. The rest is just details.”

What an ending! I did not see that coming until the final chapters.

Once again, great storytelling by Jodi Picoult where she showcases her ability to weave intricate details pulled from diligent research and uses that as a backdrop to her stories that are filled with unforgettable characters and clever plots.

Leaving Time explores grief, loss, mental disorders, as well as stretching your beliefs to consider those that die but somehow remain. In this story, thirteen-year-old Jenna takes on a mission to search for her mother that disappeared ten years ago. It happened one night at their elephant sanctuary her parents worked at when a body was found trampled on and her mother went missing. Jenna employs Serenity the psychic and Virgil the retired detective that was on the case the night of the accident. Together they unfold the mystery of the sanctuary and the people that worked there. Together they uncover what’s real and what’s not.

Leaving Time had so many rich layers to this story. First, you have the complex cast that makes up this novel and second you have the insight Picoult offered about the elephants that also played an integral role in this story.

I really appreciated learning about the elephants, how they grieve, their habits and their characters. It breaks my heart to hear how over 38,000 elephants are killed each year in Africa for commercial pouching. According to the author, at this rate, all the elephants will be gone in less than 20 years. That only accounts for one form of cruelty towards these animals. It doesn't include the calves that are left behind where some end up in carnivals, zoos, and safari's existing in adverse living conditions. What a horrible truth that was so clearly developed in this story.

In addition, I have to say that Picoult crafted a well-balanced cast for this novel. Jenna was smart, sharp and not afraid to jump through hoops to find her mother. I appreciated her sharp wit and clever ways. I also appreciated Alice and the work she did with elephants. Her studies on grief interested me and I truly learned a lot from her perspective. Serenity and Virgil were a nice complement to the cast as well, which made the twist all the more exciting.

Overall, I could not have predicted how this story would have ended, and I appreciated the twist that made me want to start all over at page one to see it through a different lens.

The four perspectives that Picoult offered through Jenna, Serenity, Virgil and Alice were insightful and made the story even more encapsulating.

As with Picoult’s other novels, Leaving Time is signature of her ability to tell a well-crafted tale that leaves you with tons of insight to consider well after turning the final pages. Perfect!
4 Suns