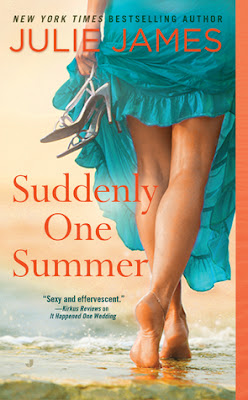 Suddenly One Summer by Julie James

From the New York Times bestselling author of It Happened One Wedding comes a novel about a man and a woman whose summer is about to get very, very steamy…

Divorce lawyer Victoria Slade has seen enough unhappy endings to swear off marriage forever. That doesn't mean she's opposed to casual dating—just not with her cocky new neighbor, who is as gorgeous and tempting as he is off-limits. But once she agrees to take on his sister's case, she's as determined to win as ever—even if that means teaming up with Ford…

Investigative journalist Ford Dixon is bent on finding the man who got his sister pregnant and left her high and dry. He's willing to partner with Victoria, despite the fact that the beautiful brunette gets under his skin like no other woman. He might not be looking to settle down, but there's no denying the scorching attraction between them. Still, the more time he spends with Victoria, the more he realizes that the one woman as skeptical about love as he is might be the only woman he could really fall for…

Julie James is one of my go-to authors when I feel like I’m falling into a book slump or simply looking for a book that I know will be a sure hit for me.

Unfortunately , Suddenly One Summer didn’t quite live up to the expectations I have of this author. When I saw this novel, I was looking forward to a summery type read that takes place by the ocean… on a tropical island… somewhere that sand and sun exist. Well talk about book covers being deceiving!

Suddenly One Summer takes place in the busy city of Chicago. Victoria Slade is a successful divorce lawyer that doesn’t believe in long-term commitments. She’s relinquished her “happily ever after” for a more sensible casual dating option. However, when she takes on Nicole’s case to find the father of her child; and her brother, Ford Dixon, becomes involved, Victoria suddenly finds herself attracted to this investigative journalist that seems to upset her well balanced life.

I have to admit that Suddenly One Summer is probably my least favorite books by Julie James. I didn’t quite find myself connecting with any of the characters in this novel and I never really fell for the romance between Victoria and Ford. There seemed to be something missing between these two very career minded adults, which resulted in a feeling that they lacked spark and excitement.

Having them working on the case together was sometimes fun, but it always felt like Victoria didn’t need or want Ford’s involvement or help. I kept waiting for there to be a moment when I’d feel the assumed connection between these two and it never really happened.

Lastly, as I mentioned earlier I was really looking forward to a summer-type book, but there wasn’t one scene or even flash back that resembled what appears on the book cover and that never happens with Julie James’s books. There’s always a tie-in somewhere in the novel. Not the case here.

Overall, not what I expected or hoped for, but not an absolute disaster either. Just okay…