Review: The White Queen (The Cousins' War #1) by Philippa Gregory 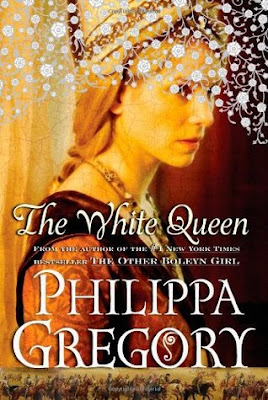 Philippa Gregory presents the first of a new series set amid the deadly feuds of England known as the Wars of the Roses.

Brother turns on brother to win the ultimate prize, the throne of England, in this dazzling account of the wars of the Plantagenets. They are the claimants and kings who ruled England before the Tudors, and now Philippa Gregory brings them to life through the dramatic and intimate stories of the secret players: the indomitable women, starting with Elizabeth Woodville, the White Queen.

The White Queen tells the story of a woman of extraordinary beauty and ambition who, catching the eye of the newly crowned boy king, marries him in secret and ascends to royalty. While Elizabeth rises to the demands of her exalted position and fights for the success of her family, her two sons become central figures in a mystery that has confounded historians for centuries: the missing princes in the Tower of London whose fate is still unknown. From her uniquely qualified perspective, Philippa Gregory explores this most famous unsolved mystery of English history, informed by impeccable research and framed by her inimitable storytelling skills.

With The White Queen, Philippa Gregory brings the artistry and intellect of a master writer and storyteller to a new era in history and begins what is sure to be another bestselling classic series from this beloved author.

Intoxicating and enchanting!! I couldn’t put this one down!

I’m a long time fan of Philippa Gregory’s novels. She’s entertained me with both her historical dramas and recent YA fiction. I realize that her historical novels are often peppered with fictional fillers, but it’s the magical elements of her stories that intrigue me. The White Queen is no exception. This novel is the first in a series that includes drama, romance, magic, and political upheaval all in one punch.

The story spans over twenty years, where Elizabeth Woodville becomes the York Queen of England when she wins the heart of young Edward who was newly crowned King. Elizabeth quickly begins to cement her standing in the court by marrying her brothers, cousins, and closely related family to royalty. She constantly keeps her pulse on the people and those who claim to be supporters of her husband, all the while scheming, planning and plotting to remain in power. Their reign is filled with constant upheaval and revolts as cousins, brothers and once allies are in constant fight for the thrown.

Elizabeth is also endangered with rumors of being a witch and enchanting her husband into marriage, as well as casting spells on her enemies. Not far from the truth, Elizabeth claims to be a descendent to the water goddess Melusina, which she uses to her favor throughout the novel.

In a few words, I was entertained, which was exactly what I was looking for. I finished this novel rather quickly and can’t wait to dive into the next installment. Throughout the story, I really believed Elizabeth and Edward loved each other, and it was nice to see their family grow throughout the years. What was tough to swallow was the constant political struggles they faced while in power, which clearly comes with the territory.

I have to give credit to Queen Elizabeth of York. I understand she wasn’t one of the most like queens in history, but if a significant portion of this novel is accurate, there is no doubt she loved her husband and children deeply. It appeared to me, her motivations and actions were steered by power… obviously, but also to protect her family.

Overall, The White Queen is a great example of how Philippa Gregory can take a moment in history and weave a tale that completely enchants the reader. Enjoyed it much!
4 Suns