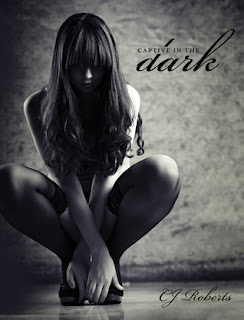 Captive in the Dark (The Dark Duet #1) by C.J. Roberts

About the book
Caleb is a man with a singular interest in revenge. Kidnapped as a young boy and sold into slavery by a power-hungry mobster, he has thought of nothing but vengeance. For twelve years he has immersed himself in the world of pleasure slaves searching for the one man he holds ultimately responsible. Finally, the architect of his suffering has emerged with a new identity, but not a new nature. If Caleb is to get close enough to strike, he must become the very thing he abhors and kidnap a beautiful girl to train her to be all that he once was.

Eighteen-year-old Olivia Ruiz has just woken up in a strange place. Blindfolded and bound, there is only a calm male voice to welcome her. His name is Caleb, though he demands to be called Master. Olivia is young, beautiful, naïve and willful to a fault. She has a dark sensuality that cannot be hidden or denied, though she tries to accomplish both. Although she is frightened by the strong, sadistic, and arrogant man who holds her prisoner, what keeps Olivia awake in the dark is her unwelcome attraction to him.


My Thoughts
He was my tormentor and my solace; the creator of the dark and the light within.

Well clearly this book has affected me to the point where I put off reviewing and sharing my thoughts on one of the most dark and disturbing novels I’ve come across in my reading career. At a point when I’d like to believe I’ve read just about every plot and storyline, it’s novels such as Captive in the Dark that make an explicit and in-your-face statement that prove I’m so clearly wrong in thinking that there’s nothing new out there, just variations of the same.

My journey into this truly twisted and beyond belief story started with what I thought was an inconsequential conversation over lunch with one of my favorite reading companions. I was sitting in a restaurant having lunch with Rachel and a few of us came up on the topic of novels that have scarred or impacted us in one way or another. Rachel brought up how Captive in the Dark immensely affected her. We’re talking sleepless nights and beyond comprehension disturbing.

Well rather than that putting me off, it intrigued me and I expressed my enthusiasm over wanting to dive into the book. Yes, I’m weird… I know... And if you’ve ever gotten that “Are you crazy?!?” look from Rachel like I have many times, you’ll know that she wasn’t kidding around but it only fueled my intrigue in discovering what this was all about. I didn’t heed her warnings, but rather jumped feet first into what became an abyss of darkness and disturbing.

So I’ve learned two things here… when Rachel says, “I just can’t recommend this book,” or “This one really affected me” I’ll have to put more stock into the fact that she knows what she’s talking about. A mistake I’ll never make again. And secondly, to say I regret reading this book would devalue the emotional limits I realized. I say that because in a sea of novels that barely move me north or south on the reading compass, it’s the ones that either strike an emotional chord or punch my psychological balance that I have to claim are the books worth my attention. I was both moved and disturbed in so many ways that I can honestly say, I’ll never forget Livvie and Caleb.

There were so many difficult excerpts in this book to read, but I was glued to the horror the entire time. And what disturbed me most was that as much as I wanted to abhor Caleb for what he did to Livvie, his backstory and moments of vulnerability humanized this monster in my eyes. I’ve come to the sad fact way back when I read Stolen by Lucy Christopher that I’m a prime candidate for Stockholm Syndrome and I’m not making light of this in any way because it’s been more than once that I’ve found myself feeling compassion for someone who torments, violates and devalues another human being. I place the utmost value in compassion for other humans, so it truly disturbs me that I would fall for a damaged and cruel person such as Caleb. I can’t explain why I did, but at the end of the novel, my brain was searching for ways to save this creature from his own demise, which was the hardest realization in this entire experience.

Livvie grabbed on to my emotional heartstrings and did not let go for one moment. She was a fighter from the beginning to the end and there was a brief moment toward the end of the novel where I felt she finally broke. I was on the verge of hysterical tears. I wanted to protect her and the entire time I hoped someone would save her, so on some level I feel like I betrayed this character when at the end; I wanted her to forgive Caleb.

There’s so much that happens in this novel that sheds a disturbing light on a world that many of us are oblivious to its existence. To say I knew that human trafficking existed is one thing, but to learn the horrors of it is quite another. At the risk of continuing to babble on, I’d just like to say that this story is not for everyone and the jury is still out as to whether it was for me. I will tell you this… I continued on to book two and I will most definitely read the final installment, but it has forever altered my belief that I know what I’m getting into when a trusted friend warns me to the possible damage a book can do. 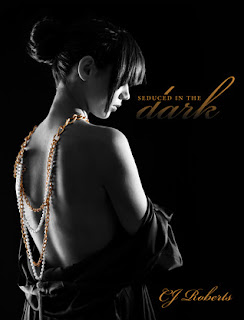 Seduced in the Dark (The Dark Duet #2) by C.J. Roberts
Published August 30th 2012 by Neurotica Books

About the book
The exciting, titillating, and action-filled conclusion to Captive in the Dark.

What is the price of redemption?

Rescued from sexual slavery by a mysterious Pakistani officer, Caleb carries the weight of a debt that must be paid in blood.

The road has been long and fraught with uncertainty, but for Caleb and Livvie, it’s all coming to an end.

Can he surrender the woman he loves for the sake of vengeance?


Or will he make the ultimate sacrifice?

My Thoughts
Once upon a time, Caleb held me captive in the dark, now he used it to seduce me. ~Livvie

She kisses my scars and I create new ones for her. ~Caleb

It was no surprise that I was going to continue this dark and disturbing novel where Caleb and Livvie continue their journey toward destruction. But what struck me most of all was that I was hoping the entire time they would find their salvation. Seduced in the Dark continues Livvie’s story of torment where she’s finally been released from Caleb’s twisted plans of revenge that involve using her as a pawn.

While Livvie is held under medical observation by Dr. Sloan, she is also questioned by Agent Reed as they both try to uncover the truth behind Livvie’s abduction. The story unfolds with a series of flash-backs sharing moments between Caleb and Livvie that were both gruesome and tender in equal measure. When Livvie is finally released from Caleb’s clutches she appears to be damaged beyond repair, but a single fact remains… she wants to somehow reunite with Caleb despite the horrors he put her through.

Again I have to admit, I wanted these two characters to somehow find a way to make it work. Their story began with a dark and evil plan of revenge, but as time went by it was clear that Caleb was trying to find a way out of the twisted reality he created for himself and Livvie. The entire time, I had this compounding urge to want their story to be re-told… offer them a different beginning with a possibility for a happily ever after, but chapter after chapter it was clear that a time for do-overs was long passed.

When Livvie is finally released from medical observation, I have to say once again that I was proud of her strong sense of survival. There was no doubt that in some sense she was broken, but in no way was she giving up. I applauded her sense of resolve and I admired her will to move on.

As far as Caleb was concerned, do I feel he did enough to redeem himself? No, and I don’t think he ever will. Did I accept the flaws and dents in this character? Absolutely, and with a huge sense of compassion. His backstory got to me … it really did. I won’t use that as an excuse for what he did, but I will use it as a means for understanding his motives.  And, at the end of the day when the crime has been committed – motive is all you have to help you understand.

Overall, this second installment hooked me deeper into Caleb and Livvie’s damaged lives and I have a huge sense of curiosity to see how their story continues. I will state again that this series is not for everyone, so you must proceed with extreme caution. That’s more than I can say for myself because I still feel emotionally battered.

Email ThisBlogThis!Share to TwitterShare to FacebookShare to Pinterest
Labels: 4 suns, 5 suns, arlene's review, c.j. roberts, captive in the dark, seduced in the dark