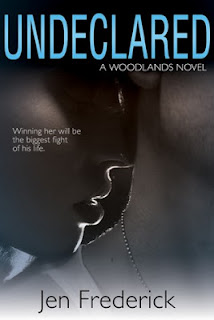 
About the book
For four years, Grace Sullivan wrote to a Marine she never met, and fell in love. But when his deployment ended, so did the letters. Ever since that day, Grace has been coasting, academically and emotionally. The one thing she’s decided? No way is Noah Jackson — or any man — ever going to break her heart again.

Noah has always known exactly what he wants out of life. Success. Stability. Control. That’s why he joined the Marines and that’s why he’s fighting his way — literally — through college. Now that he’s got the rest of his life on track, he has one last conquest: Grace Sullivan. But since he was the one who stopped writing, he knows that winning her back will be his biggest battle yet.

I was offered the opportunity to read and review Undeclared by Jen Frederick and I truly enjoyed it. So thank you Ms. Frederick for providing me a review copy of your book.

As of late, I tend to gravitate to books that have a glimpse of military backdrop in their setting. I have to commend these authors for offering us a sense of what our service men and women go through when they are deployed for stretches of time and then expected to acclimate back into civilian life. Undeclared shared what it was like for Noah Anderson after four years of service to come back and struggle with his immergence into society. My heart goes out to them and I hold these authors in high regard that choose to share their stories.

However, to label this book as a military/service novel would leave several other important themes on the table. In Undeclared we also get to meet Grace who started out writing to Noah, while he was deployed, as a school project. What transpired from there was a four year relationship between these two through pen and paper. For his entire service, Grace religiously wrote to him and sent him care packages, which throughout his entire service, she was the only one he received parcels from back in the states. These two had never met, but through their letters that are shared sporadically throughout the novel, Grace and Noah established a friendship they hoped would manifest when he returned home.

What turns out is Noah completes his service with the Marines and faces a difficult transition back home. He cuts off all contact with Grace, which breaks her heart, and seeks to find some way to re-build the civilian life he’s expected to re-assume. After two years, these two come face to face at Central University. We find that Noah has a solid plan for his future and surprisingly Grace is undeclared. As they struggle to re-ignite the friendship they once shared, they face a few obstacles in their path. However, Noah knows for certain that he won’t throw away another chance of keeping Grace in his life.

Again, I say… I truly enjoyed this book. It felt realistic and despite the mild drama infused throughout the book, nothing was over the top. It simply shared a story about two people trying to find their course in life and hoping that when they put the pieces together, they can somehow find a way to fit it together.

I want to look at the world like Grace does, so that even the ordinary things look amazing. ~Noah

Noah was a true star in this novel. He was focused and determined with a level of flawed that made him appear normal. His sporadic southern accent and constant attention to manners kept a smile on my face whenever he commanded the stage. Grace was a perfect blend of aloof to Noah’s solid presence. Where Noah had a five year plan, Grace didn’t seem to know her hour by hour schedule. Somehow, they fit in all the right ways, which made me enjoy their journey.

I’ve already made every strategic mistake possible. I left too late last night to catch her. I surprised and maybe embarrassed her after class. If I catch her at a party and spill beer all over her, my trifecta of stupidity will be complete. ~Noah

As I mentioned previously, I appreciated the glimpse into Noah’s military tour, which was shared through the letters these two exchanged throughout his deployment. Frederick included them throughout the novel, and they served as the perfect backstory to Noah and Grace’s past.

Overall, Jen Frederick’s novel Undeclared was definitely enjoyable and worth my time. I look forward to reading more of her novels as she seems to have that knack for creating likeable characters coupled with a realistic and heartfelt story.

Note: A copy of the book was offered by the author in exchance for an honest review.